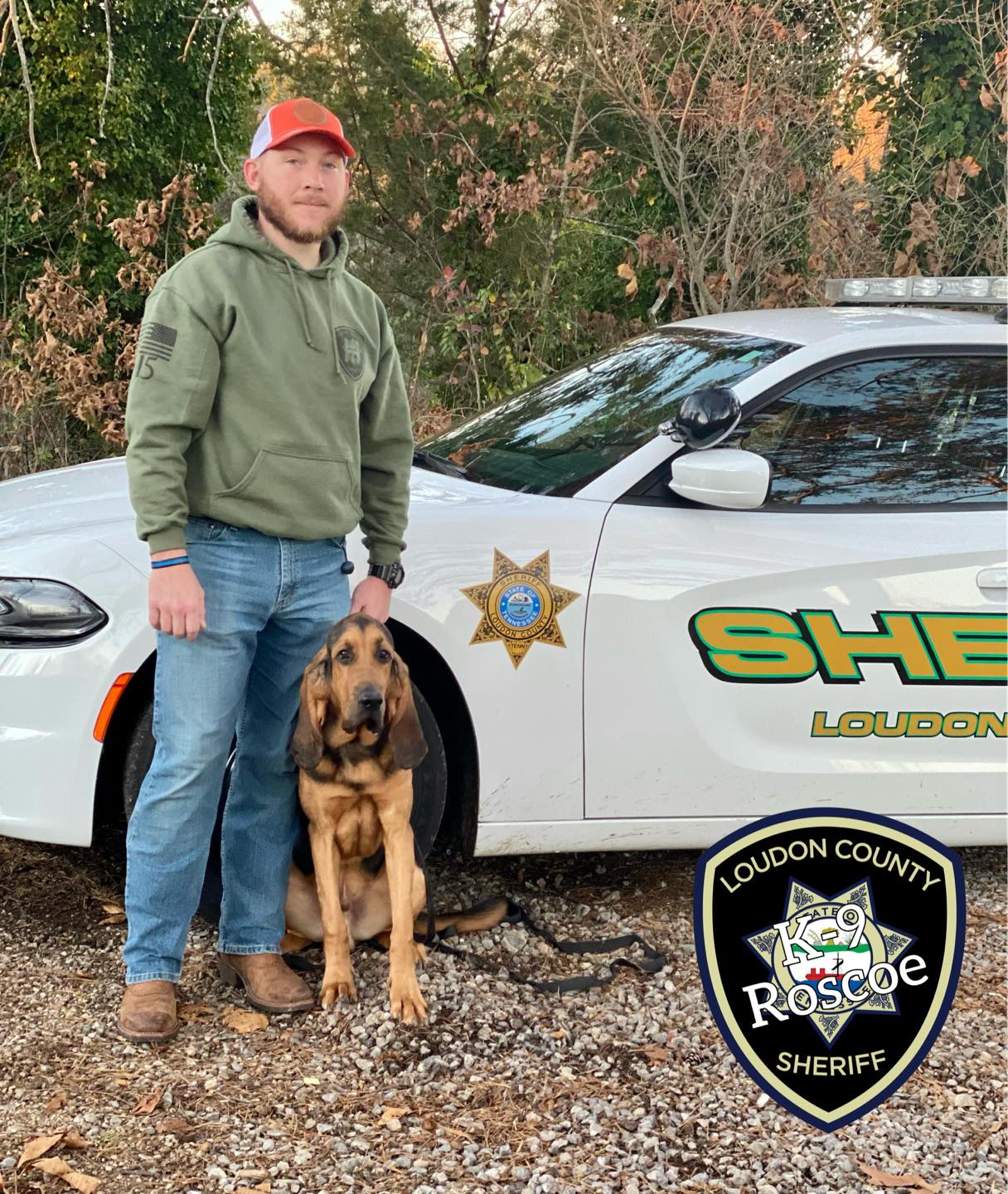 LOUDON COUNTY, TENN.- There’s a new Sheriff in town. And if you run, hide or are lost, chances are he will find you. He’s not like any other deputy we’ve had before though. His name is Roscoe and he’s a 7 month old Bloodhound who found his way to LCSO thanks to the help of Sergeant Allen Russell of the Blount County Sheriff’s Office and Captain David Finchum of the Sevierville Police Department.
“Several months ago, Sheriff Guider and I began having a discussion with a few people about the possibility of adding a new type of team to our K-9 unit.”, said Chief Deputy Jimmy Davis. “We were confident that by adding a tracking dog to our agency, it would benefit us in many ways that our traditional patrol K-9 units might not always be able to.”, said Davis. “In a community where we have children who live with development disorders, and seniors who face horrible diseases like Dementia and Alzheimer’s, any resource we can add to help locate these individuals when they walk away from their homes is worth its weight in gold.”
That conversation eventually included Sergeant Allen Russell, a world renowned K-9 trainer who specializes in bloodhound tracking dogs, of the Blount County Sheriff’s Office. “We approached Sergeant Russell with the idea that we’d like to add a bloodhound team.”, said Chief Davis. “We knew that Blount County had a very reputable bloodhound program and their expertise and knowledge would be a great place to start if we wanted to establish one of our own.”
Sergeant Russell eventually led LCSO to Captain David Finchum of the Sevierville Police Department. Finchum had recently learned of a Bloodhound puppy that a local Sevierville Alderman had and was offering, free of charge, to an agency who would want to adopt the young puppy. And just like that, and at no cost to the agency, Roscoe became one of the newest rookies in Loudon County.
Prior to Roscoe entering the picture, Deputy Brandon Dishner had been pursuing a goal of learning the man tracking trade. Dishner had been spending time with Russell and the other Blount County Bloodhound teams in an effort to observe and learn how their skills could lead them to those who were lost, injured or wanted. So when Roscoe took his first ride from Sevierville to Loudon County, it was in the front seat right beside of his new partner and “dog dad”, Deputy Dishner.
Dishner and Roscoe would spend the next several months both building a bond and attending training alongside their new training mentor, Sergeant Allen Russell. “The handler training and certifications that Allen prepared Brandon and Roscoe for will prove to save lives, and help us track endangered or wanted individuals, in the future.”, said Chief Davis. “The Blount County Sheriff’s Office and Sheriff James Berrong have always been a strong ally in our efforts to make this a safer and more self-sufficient agency. Without their enthusiastic support and direction, and the hundreds of hours spent training Dishner and Roscoe, this program wouldn’t have been possible.”, said Davis. “We’ve just shown that by using a strong network of relationships across our region, that we can find ways to think outside the box and bring new and innovative ways to make the Loudon County Sheriff’s Office more capable and more efficient for any situation we face.”
Deputy Brandon Dishner and K-9 Roscoe just completed their month long handler course last week at the Blount County Sheriff’s Office. In addition to that, K-9 Roscoe also obtained National Narcotic Detector Dog Association (NNDDA) Certification in October. Dishner and Roscoe, who are assigned to LCSO’s Nightshift Squad, are now fully operational and bring the total number of K-9 teams at LCSO to six. LCSO already has five dual-purpose patrol K-9 teams which specialize in narcotics detection, tracking and criminal apprehension.
LCSO would like to also give a special thanks to the Sevierville Alderman Mitch Rader who donated Roscoe and to Knoxville based Heelex Medical Center for their financial donation that was used for Roscoe’s K-9 vehicle transport kennel. These donations made this program possible.
Heelex
Sevierville Police Department
Blount County Sheriff’s Office
Blount County Deputy Dishner Heelex Medical Center Loudon County Sheriff’s Office Sergeant Allen Russell