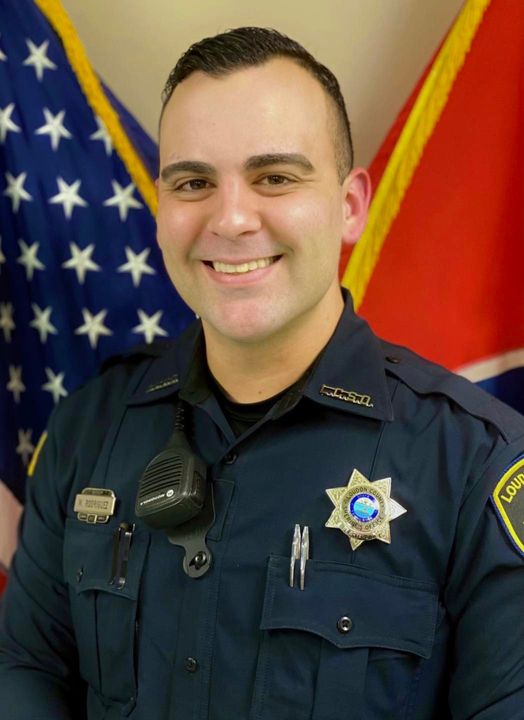 LCSO EMERGENCY MEDICAL RESPONDER AND AUTOMATED EXTERNAL DEFIBRILLATOR PROGRAM PROVING TO SAVE LIVES, DEPUTY GIVES WOMAN ANOTHER CHANCE AT LIFE
LOUDON COUNTY, TENN.- A decision to better train deputies as medical first responders, and a partnership with Priority EMS, is already proving to save the lives of those who live in and travel through Loudon County.
On Monday, November 29th, 2021, Deputy Mark Rodriguez was dispatched to an unresponsive female in a vehicle at the intersection of Highway 444 and Highway 72 in Southern Loudon County. The caller stated his wife had been experiencing chest pains and left arm pain while in their car on the way back to their residence. She then became unresponsive and stopped breathing. Deputy Rodriguez arrived on scene within one minute of the call being dispatched. Deputy Rodriguez was able to remove the female from the car and place her on her back beside the vehicle. Without hesitation he began chest compressions and was able to hook up his department issued AED. The AED delivered one shock to the female and shortly after she began breathing on her own. EMS arrived a few minutes later and was able to stabilize her and transport her to Parkwest ER where she is expected to make a full recovery.
“Without Deputy Rodriguez’s quick actions and medical training, the outcome of this call could have been much different. This act is the greatest example of service to our community.”, said Corporal Zac Frye, who witnessed Rodriguez in action.
Deputy Rodriguez is just one of 12 Deputies who recently completed an EMR (Emergency Medical Responder) Certification Program through a partnership with Priority EMS, the agency who provides advanced life support and critical care emergency medical services to Loudon County. This program, which came at little cost to LCSO, and was facilitated by Priority Director Travis Estes, and instructors Paramedic Keith Sarten and Paramedic Drew Slemp. Slemp is also a full time Flight Paramedic with UT Lifestar. And to add more personal connection to the relationships, Slemp and Estes also serve as part-time deputies with LCSO.
“Last year Sergeant Matt Fagiana, who is also an Advanced Emergency Medical Technician with Sevier County EMS, approached myself and Sheriff Guider with the idea to certify our patrol deputies as EMR’s.”, said Chief Deputy Jimmy Davis. “Seeing the value in adding more life-saving training to our deputies immediately gained our support. We know from first hand experience that in far rural areas of Loudon County, our deputies are often first on the scene of medical emergencies that require immediate interventions such as, airway management, CPR and early defibrillation.”, said Davis. And that’s when Estes entered the conversation. Estes and Fagiana worked to develop a plan to supply an AED (automated external defibrillator) to each patrol zone and Estes, whose experience as a medical instructor spans 20+ years, began the proposal to the State of Tennessee to allow him to host a EMR Course at LCSO. Today, LCSO has four AEDs deployed that were sponsored by Priority EMS and were no cost to LCSO.
The deputies who competed the EMR Course recently received advanced training on airway management, medical and trauma emergencies and basic skills to prepare the patient for EMS’s arrival as well as assisting them during transport to a local emergency room if necessary.
“The partnership and relationships that we have with our Fire and EMS teams, especially Director Estes and his team at Priority EMS, are crucial to being a more advanced, a better trained, group of law enforcement officers who realize that we operate as much more than cops who take people to jail, enforce laws and write tickets.”, said Davis. “We want our deputies to be able to provide life saving care to not only themselves and their beat partners, but to the community. And to our knowledge, we are one of the few sheriff’s offices in the state to have an EMR Program – Blount County being the only one that I know of in this area.”, said Chief Davis.
“This recent event that involved Deputy Rodriguez and the skills he used to save a woman’s life is exactly why I supported this EMR and AED program here.”, said Sheriff Tim Guider. “Giving that family a chance at more life and more memories with their loved one makes all the hard work and dedication of those involved worth it because with out that training and without that AED, that day could have ended much differently that what it did.”, said Sheriff Guider. “We know it’s going to positively touch other families in the future too.”
If you or your organization would like to help fund the purchase of additional AED’s or Medical Equipment for our EMR’s, please contact Sergeant Matt Fagiana at [email protected]
Deputy Mark Rodriguez Jimmy Davis Loudon County Loudon County Sheriff Department Priority EMS Sheriff Guider